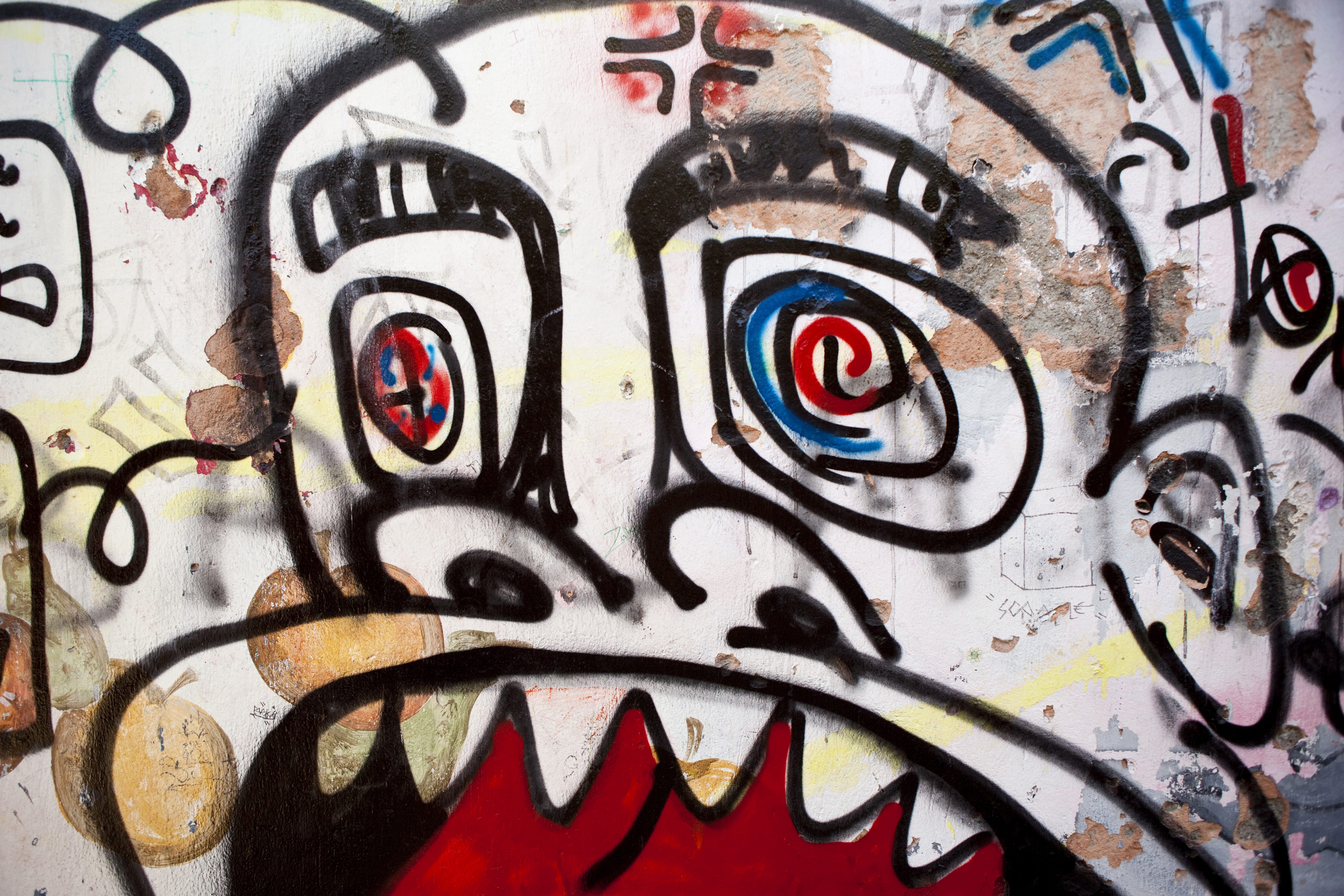 Head of a colorful graffiti on a wall

This is where the beast resides and breathes and eats, mother.
A beast that breaks is called, mother.
Why are you as such, mother?
Am I just a bother?

In the beginning nothing,
Only listening and talking.
Then a mutation.
Is it destined for elimination?
Now thinking and doing.
Perhaps not elimination, but procreation?
The talkers imitate but fail to recreate
success.
Now they idolise in excess.
But they fail to recognise successful innovation,
By those with the mutation.

The whole screen filled their eyes, the world drifted by.
They were as silent as the night.
The buttons on the controller clicked and clacked

the noise of the game
crackled from the weary headphones.

They were in another world that they could belong and feel included.
Each task they undertook improved with the press of a button.

No noise could they hear from the outside world,
Only a tap on the shoulder would wake them from their slumber.

They say that once you start in secondary it will be the best years of your life
When it’s really an endless cycle of being scared and hopeless
When you talk about it they say “Grow up” or “Get over it”
Your mind starts to wonder
Your head starts to spin
You feel the back of you head go “Hey! Why don’t you give up”
You see the class laughing you think it’s you they see
You see the teachers thinking you are a disappointment
You feel stuck, you feel like no one will help
You feel your breaths get heavier and heavier
You find it hard to get out of bed or to find that motivation
You say “Hey, maybe I will give up”
But you were called to the office
You were asked these questions over and over like “Hey are you o.k?”
Your parents are more worried then ever when you rolled up you sleeves to show those scars
You were sent to see some stranger to talk about your problems
You were taking pills over and over
You start thinking “This can’t be it”
You start to open and your parents start to listen
Your teachers were told “They need your support”
You become happier and brighter
You start achieving things you didn’t think you would achieve
And you finally stop taking those pills
Those pills that made you drowsy and tired
You finally get that freedom you wanted
You say “Hey I’m fine now”

You think he was a king a leader a HERO

But behind the scenes he was the reincarnation of the devil

He broke my people, hung them for HIS sins.

But he’s a hero, cut the crap he planted bombs for children to find

He’s the reason kids grew up without a father

He’s the reason for the death of a race

He killed my people

Women and children fall, men cut down as they stand

He leaves families to be broken brainwashing children

Telling the world that what he does is right

He hides behind the bodies of his victims

But he is a hero?

He is the hero that steals from the poor

Takes from those who work and give to the lazy

Now ask yourself “is he really a hero?”

if I don’t pass this test ima failure to you.

The pressure, the study, the cheating, the lies,

I’m not a failure in my own eyes.

The effort, the triumph, the failure the pain,

whatever happens it wasn’t in vain.

Life is a journey, you are the train,

make your destination, achieve that fame.

Find what you love don’t be a fool,

hold those things dear it’s your life to rule,

My troubled mind swirled
Like dancing on knives, my suffering has just begun

Then there was warmth, a sudden relief
When I look at them I feel like I’m allowed to breathe and be
I can be me, with them I feel no grief
With eyes wide open I’m able to see

Happiness is a concept I was never fully able to grasp
Yet with them it’s easy to feel free
I let out a happy gasp
With friends and my one love, who could disagree?

I lost her from him in the moon light
Where I felt nothing but agony, anger and despair
Where I felt lost, alone and forgotten myself
Where I belong with her forever again
Where i finally start to breath and live again

I sit with them the odd time at lunch.
The older fellas who proclaim themselves as the wisest of them all.
Are you really?
I eat a soggy piece of chicken and mash with my knife and fork.
“Coons use their hands to eat , not knifes and forks, i thought you would know different?”
I laugh it off , hiding inside my pain and agony.
Roses are red , violets are blue, am i not human too?

It’s all over,we had lost the war,
My penalty missed had been the final blow to knock the keep gates down.
After that it was slaughter, point after point, death after death.
All because of me.
I couldn’t hold my nerve, hours of practice gone to waste just like that.
I could feel my whole world collapsing around me,
The death stares from my fellow soldiers who had pushed themselves to their limit to hold back the enemy and create gaps in their lines
All for me to fail.

A Lament for Lockdown

From the mighty land of mountains of sheep and cattle
from shearing and silage
old men drinking porter and singing songs
a county of tough rebel men
who fought the tans and won our freedom
I come from small club matches
to hope of making it to Croke Park.

This land I come from is lost to the darkness of lies.

This land I come from riddled with greed and flies

This land I come from is lost to the darkness that’s sweeps over it.

This land taught me right from wrong.

Day hot as hell itself nights silent and long

This land I shall reunite as one.

This land is South Africa home of the warriors.